DreamBIG Entertainment.
There is nothing in the world that can match the experience of piloting a fighter jet. So few people receive the opportunity to fly these magnificent machines; most of us can only dream of the experience. Consider what it would mean to merely sit in the cockpit of a fighter. Then imagine getting into a flight suit, putting on a helmet, adjusting your oxygen mask, getting strapped into an ejection seat and holding the controls. Smell the fuel and oil that past pilots have smelled as they prepared for a mission. Place yourself in their time and space. No conventional aviation museum exists today where you can touch, let alone sit in, the cockpit of a fighter jet and experience this unique aviator feeling. Creating a memory lasting a lifetime.  DreamBIG is about to change this.

For several years, I have searched for  restored American fighter jet cockpits. These aircraft speak to the glory of American aviation ingenuity through elements of what is today known as "S.T.E.M."  While also recalling the history of war, including Korea, Vietnam and the First Gulf War and peacetime service, such as the transport of supplies for humanitarian aid missions.  There are now less than a handful of restored fighter jet cockpits in private hands anywhere in the world. Most retired jets end up cannibalized for parts and then shredded for recycling of their valuable metals.

In 2010, our goal was to “re-commission” an aircraft to share the excitement of a Fighter Jet Pilot and engage the public by telling the stories that make up our history.  In doing so, we'd also provide a new venue for national advertisers and sponsors that has no equal in reaching consumer attention.
TODAY, Our Goal has increased.  Today it's something deeper yet just as important and close to heart.  To simply SHARE.  Share the History of Aviation! Share the opportunity to experience it first hand, and to share my Faith which has allowed the DREAM in DreamBIG to take flight; one visit at a time.

2020 IS THE 10 YEAR ANNIVERSERY OF DREAMBIG!   Over the last 10 years our main Aircraft ground attraction has been the A-7 Corsair II.  In 2017, I released a F-101 voodoo cockpit.  I set the -101 up as a F-14 TOPGUN Tomcat tribute for a casino’s special event.   After that event, I knew we had to locate the perfect Navy air frame which could be used as an authentic TOPGUN Experience.  I began to track a couple of decommissioned Naval cockpits that were in Private hands.   One of those was an A-4 Skyhawk cockpit section.   Viper and Jester had used the A-4 in the Original Top Gun movie.     We began to prep for the addition to the DreamBIG Squadron of Touring Ground Attractions.   During this process, It was announced that TOPGUN II “MAVERICK” would be filmed.  Putting the A-4 Top Gun project on hold, I immediately reached out to a friend who was in possession of a F-18 Hornet cockpit section.  In late 2019, we came to terms on an agreement which would allow DreamBIG to take possession and transform the F-18 cockpit section into the TOPGUN MAVERICK F-18 Hornet Experience.  The Goal would be to bring the F-18 cockpit to life as a fully interactive event ground attraction and museum piece.   We then reached out to Paramount and Tom Cruise’s publicist team to inform them of our intention to reproduce the Maverick F-18.   The first step was to transport the cockpit to our Trailer manufacturer.  We then transformed the cockpit’s display cart to a permanently mounted F-18 trailer.   Next included locating and procuring hard to find instrumentation to complete population of the museum level cockpit.    From there an event boarding system was created to allow for visitors to safely and easily gain access into and out of the cockpit.   Then FINALLY, the package was completed by the addition of the custom paint and graphics that bring the DREAMBIG “TOPGUN MAVERICK EXPERIENCE” to life!
DreamBIG has invested countless hours in the locating, procurement, restoration and presentation of the DREAMBIG TOPGUN EXPERIENCE   MAVERICK F-18 HORNET.  The financial investment is immeasurable based upon the time, sponsorship dollars and in-kind donations to restore and create the Top Gun Experience.  On top of that, the cockpit itself is priceless due to the fact that there are virtually no authentic F-18’s in private hands.
The hardest part in the entire process has proven to be in locating the actual history of this veteran of the skies   Most of the history of modern fighter aircraft is often classified information.   However, I have been able to find out a small portion of her History.   As I am writing this, more information has been located and has yet to be confirmed.   What I can say is that this particular cockpit section was used in the development of the F-18 SUPER HORNET.  It was stricken off after a hard landing incident. The remaining cockpit was then used for testing and development.  It was then obtained by a private individual for Display at the Tennesse Aviation Museum and then the Florida Air Museum.  DreamBIG took possession in January of 2020.   DreamBIG ENTERTAINMENT LLC is DOD and US NAVAL Trademark Licensed to display and show decommissioned and demilitarized modern military aircraft with Naval markings.
Our Goal in creating the DreamBIG TOPGUN MAVERICK F-18 Experience remains the same as it was when I began in 2010;  to Inspire, Educate, and Motivate visitors with a hands-on and guided opportunity to experience the F-18 HORNET with the FULL TOPGUN EXPERIENCE.


The DreamBIG A-7 and F-18 Hornet cockpits tour the United States as a Mobile Interactive Aviation Museum.  The experience can be brought anywhere!  The DreamBIG Tour season runs from February to November annually.  At a time when getting the attention of the average consumer requires unconventional thinking, DreamBIG creates a national buzz one local market at a time while effectively providing memories and smiles to each visitor.

Over the next several pages, please click through and Enjoy Our DREAM!  Let us know how we can come and share with YOU!

**   PLEASE CHECK OUT OUR TOUR SCHEDULE PAGE AND ENJOY 2 TELEVISION SHOWS THAT WE WERE APART OF IN 2013 AND 2014       The Discovery Channel's "FAST n LOUD" and "Airplane Repo".  DREAMBIG is continuing to set the AIR SHOW Industry abuzz with exciting additions annually!   Watch for OUR ""TOP GUN Experience COMING in 2020"!! 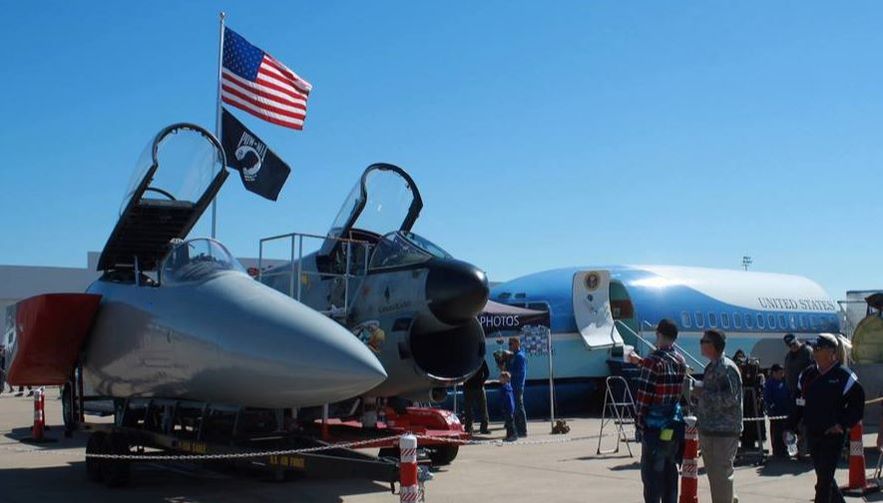